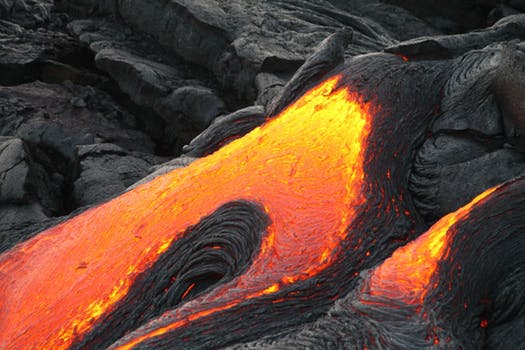 Hawaii’s Big Island has been rocked by volcanic eruption since May 3. During the first four weeks of eruptions, emergency officials estimate approximately 2,500 residents were forced to evacuate. At least 75 structures were also destroyed by this natural disaster.

As of August 12, according to USGS, a gas plume billows from Fissure 8, but the only “red” lava visible on the flow field is that oozing into the ocean between the Kapoho Bay and Ahalanui area coastline. In an interview with the Boston Globe, Paul Davis, a geology professor at the University of California Los Angeles, said lava in Hawaii is hotter than other volcanoes, making it more fluid.

Most of Hawaii Volcanoes National Park remains closed due to earthquakes, corrosive volcanic ash, and continued explosions from Halema‘uma‘u, the summit crater of Kīlauea Volcano, according to the National Park Service. This ordeal has devasted many local communities and has people worried about the ‘Ring of Fire’ that touches the West Coast.

Nestled along the 800-mile stretch from Mount Baker in Washington to Lassen Peak in California are 13 volcanoes that could erupt at any time, according to the Associated Press. This includes Mount St. Helen’s and Mount Rainer, located roughly 100 miles southeast of Seattle. Part of the ‘Ring of Fire,’ these peaks are situated on tectonic plates.

The ‘Ring of Fire’ — otherwise known as the Circum-Pacific belt — is a region of earthquakes surrounding the Pacific Ocean, according to the U.S. Geological Survey. Approximately 90% of the world’s earthquakes occur in this area.

Behind only Indonesia and Japan in the number of historically active volcanoes, the U.S. is a hotspot, according to the USGS. More than 1,500 volcanoes have erupted over the past 10,000 years, and roughly 10% are located in the U.S. The vast majority are found in the Aleutian Islands, the Alaska Peninsula, the Hawaiian Islands, and the Cascades in the Pacific Northwest.

While the U.S. hasn’t been home to any of the deadliest volcanic eruptions, the Pacific Northwest has experienced a couple major ones, according to the USGS. In 1980, Mount St. Helen’s erupted, killing 57 people, largely due to asphyxiation from ash. Previously, Lassen Peak erupted in 1915, but miraculously, no one was killed.

Looking for reliable environmental testing equipment that won’t break your budget? Eco-Rental Solutions has the tools you need to get the job done right. Contact us today or request a quote online!