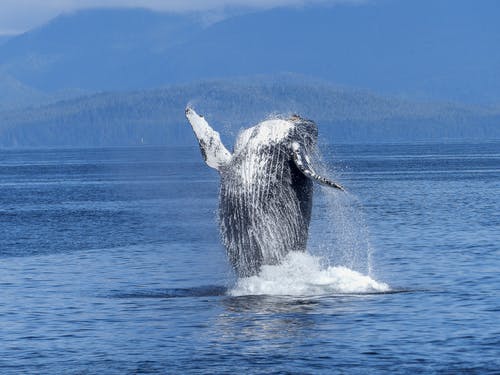 Once upon a time, the humpback whale population was bountiful in the Pacific Northwest. However, these mammals have been largely non-existent for nearly a century.

Recently, humpbacks have made a major comeback in the Salish Sea, the Columbia River mouth, and the Northwest coast — aptly deemed the “humpback comeback” — according to the Northwest News Network. Their presence is delighting whale watchers, who can’t wait to catch a glimpse of these gorgeous mammals.

Of course, along with the excitement of their return, comes concerns for their safety. Since these bodies of water are no longer equipped to house humpbacks, experts are worried about ship strikes and entanglement in fishing gear. For example, several humpbacks have washed ashore dead this year and last, due to becoming entangled in ropes from crab pots.

Researchers are studying the reason behind this resurgence, in an effort to determine what caused it.

The Pacific Northwest isn’t the only area graced by an increase of humpbacks — Southern California has also seen a surge in sightings. In December 2018, The Orange County Register reported humpback sightings in local waters during recent weeks.

Plenty of food and cool water temperatures could be attracting these mammals, according to The OCR. If these conditions continue, experts believe humpbacks might stay put.

Humpbacks are no stranger to Northern California, but they’ve been arriving increasingly early, according to the San Francisco Examiner. Traditionally, they could be spotted in June, but since 2015, they’ve been surfacing in April — possibly due to climate change.

Unfortunately, the humpbacks’ early arrival has triggered a surge in accidents. A total of 129 cases of whales entangled in Dungeness crab pots were reported between 2015 and 2017, compared with around 10 per year in previous decades, according to the SF Examiner.

Humpback whales can be found in every ocean in the world, according to National Geographic. Their physical appearance is characterized a small hump in front of their dorsal fins — i.e., the name humpback.

These gorgeous creatures sing magical songs that carry for long distances. Scientists are currently studying these sounds to understand what they mean, according to National Geographic.

Even without their songs, these creatures can be hard to miss, as National Geographic notes they range in size from 48 to 62.5 feet — around the size of a bus.

Tired of getting unreliable results from subpar testing equipment? Eco-Rental Solutions offers top-quality tools at rates you can afford. Contact us today or request a quote online to start your next study with confidence!